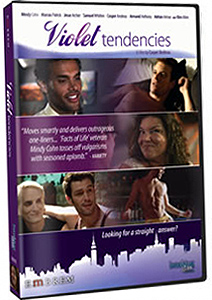 Starring Mindy Cohn, Violet Tendencies tells the tale of Manhattan's most fabulous fruit fly! At nearly 40, Violet (Mindy Cohn) is the racy, fun-loving belle of the ball. She spends her nights as royalty, but when the party ends she always heads home alone. While her co-worker Riley (Sam Whitten) struggles with his baby-crazy boyfriend Markus (Casper Andreas), and her roommate Luke (Jesse Archer) tackles monoga-mania, Violets romantic life is one big bellyflop. Realizing shes at a certain age and still single, Violet is at a crossroads. In the fast-paced world of high fashion PR where she works, Riley tells her she need only seek out a straight male version of herself -- the mythical "Fag Stag". But the glamorous guru Salome (Kim Allen) gives her conflicting advice. To nab a man, she insists, Violet must abandon her gay boys once and for all. When Violet arrives home from yet another disastrous date to find Luke has organized a gay sex party in her bedroom, she decides Salome may be right. In order to get a prized man of her own, Violet strikes out on a hilarious quest to change the woman she is. Chasing love at all costs, she may find it in the most unlikely of places.

"Breezy and funny... a great performance from an unconventional but absolutely charming leading lady..." -MODERNTONIC.COM

Classic one-liners, an unexpected ending, and even echoes of true-to-life modelesque sniping a la The Devil Wears Prada, this film is as fast-paced and dazzling as a disco mirror ball." -The Vancouver Sun