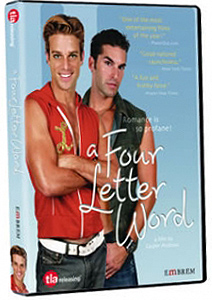 “Let the Manhunt begin!” when Luke enters the gay bar flanked by his sidekicks, he doesn’t know that he is about to meet his match—in hot macho man Stephen. Awakening in a twisted heap of naked strangers, Luke heads to work at a Chelsea sex store where he is forced to face his lifestyle by his coworker Zeke, a confrontational gay crusader who will stop at nothing short of changing the world. Up the street, actor/waiter Peter is moving in with his long time boyfriend Derek. His restaurant boss Marilyn is maniacally planning her wedding, but when her AA sponsor, Trisha, declares her attraction, Marilyn’s sobriety and marriage may be in jeopardy. Smitten with Stephen, Luke considers giving monogamy a chance. He attends a sexual compulsives meeting where he discovers he is not the only nympho in New York. Luke is falling for Stephen, but it soon turns out that Stephen’s cash doesn’t flow from a trust fund; he works hard for his money—as a hustler! A relationship between a playboy and a prostitute depends on whether that is the only secret Stephen is keeping. Among party boys, monogamists, addicts and activists, Luke’s quest may unearth answers his heart is not ready to handle. The protagonists ultimately realize that being true to yourself may be the best way to deal with the many complications of A Four Letter Word called love.

"One of the most entertaining films of the year!" Gay.com

"A sleek, slick, and very funny comedy about love, sex, and living life on your own terms." HX Magazine